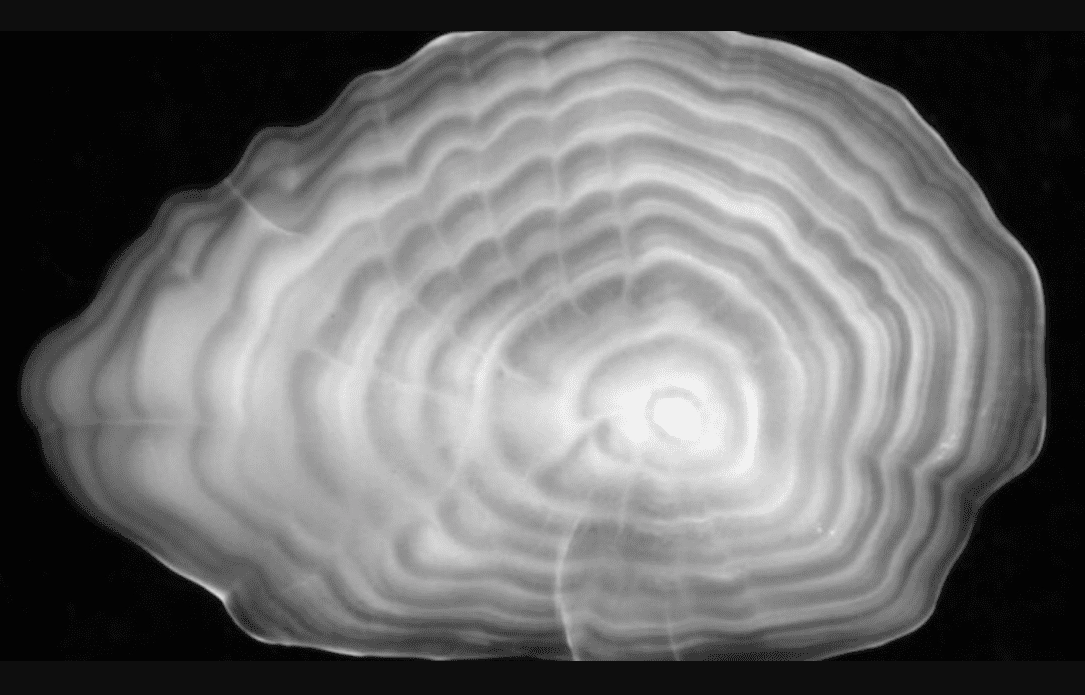 Otolith rings, like tree rings, reveal the rate of growth. The strontium signature, not visible here, is what tells us where the fish has been. Photo courtesy of CalTrout.

On November 17 the Federal Energy Regulatory Commission (FERC) issued the Final License Surrender Order for the Lower Klamath River Hydroelectric Project. With this final regulatory hurdle now crossed, the Klamath River Renewal Corporation and its local Tribal and nonprofit partners can remove the four lower Klamath River Dams located on both sides of the California/Oregon border over the next two years.

An important piece of this work involves documenting the watershed conditions before and after the dams come down to measure impacts from dam removal. For several years, the Yurok Tribal Fisheries Program, California Trout, and UC Davis have been at the center of this work, monitoring lower Klamath River chemistry, water temperatures, and insect populations to develop baseline datasets in advance of dam removal.

One of the more intriguing monitoring efforts tracks the life cycle of fish in the watershed. For the past three years, the U.S. Fish and Wildlife Service and a team led by Dr. Rob Lusardi, an aquatic research ecologist and applied conservation biologist with the Center for Watershed Sciences at UC Davis, has harvested otoliths from the carcasses of salmon that died after spawning. Otoliths are the hard, calcium structures located in the inner ear that help fish hear and sense vibrations in the water so they can navigate their surroundings.

The otoliths are handed off to Dr. Rachel Johnson, lead of the Salmon Life History Team at the National Marine Fisheries Service; her lab is also based at the UC Davis Center for Watershed Sciences. Johnson’s team mounts the otolith in epoxy, then slices off thin layers, on which growth bands can be observed that show the growth rates of each fish, from incubation to death.

The element strontium is the next key piece of this scientific process. Number 38 on the periodic table, strontium is a soft, silver-white metal in the alkaline earth series. Embedded in rock formations, it seeps naturally into bodies of water. In most places, including the Klamath Basin, this seepage gives a unique strontium signature to a body of water.

With water samples collected across the Klamath watershed by UC Davis, Yurok Fisheries, and the Oregon Department of Fish and Wildlife, Dr. Johnson is mapping where drops of water came from by analyzing their strontium signature.

As salmon swim in freshwater streams, minute quantities of water-borne strontium are deposited and locked away in the otoliths, embedded in the daily growth rings, accumulating in a clear chemical sequence over the fish’s lifetime.

By analyzing the growth rings and strontium signatures the research team is able to reconstruct the fish’s growth rate, migration history, and size as it transitioned through various life stages. Fisheries managers can use this data to improve the salmon’s prospects for recovery and shape post dam removal restoration efforts in the Klamath Basin.

And that’s why Johnson and Lusardi are excited about this research. Having developed the tools and the source material of mapped streams in the Klamath watershed, they can now consider what Johnson describes as “a myriad of ecological questions that are management-relevant.” Knowing more about the early habits of salmon that make it back to spawn can lead researchers to examine conditions in various tributaries to see what could be causing strong or weak runs. Lusardi and Johnson have expanded their strontium map to include ancestral habitats blocked by the lower four Klamath River dams slated for removal. They hope this tool will help track the reestablishment of salmon to this habitat and lead to improvements in juvenile rearing, growth, and outmigration strategies.

Additional monitoring efforts conducted in the Klamath watershed in advance of dam removal will also help managers. Near upper Klamath Lake, data from an experimental release of acoustically tagged young salmon this past spring will help predict outmigration patterns and timing for restored populations. This experimental release will be conducted again during spring 2023.

Research and monitoring on the effects of dam removal, while immensely useful, are chronically underfunded. The level of research conducted now in the Klamath region is unusual, mainly due to the attention that Tribes and nonprofit organizations have drawn to the project’s myriad benefits, its large scale, the active engagement of the states of Oregon and California, and philanthropic support. In a way, the rarity of these studies gives them outsized importance – they may be used to help inform management choices facing other watersheds.

Supporting Community and Citizen Science at the Elwha ScienceScape Symposium